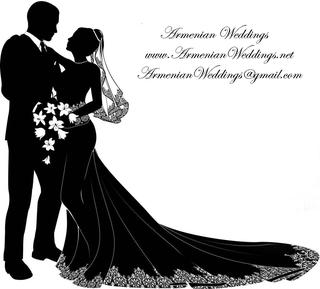 "The Armenian wedding celebration begins the night before the ceremony when the groom’s family brings beautifully wrapped gift boxes to the bride’s family. These contain the veil, her shoes, chocolate, Armenian cognac, perfume, and flowers.
The bride’s parents’ house is decorated and food, desserts and family photos fill the tables. Before the ceremony, the bride’s brother will place money in her shoe for good luck and he will place the bride’s shoes on her feet. Another fun shoe tradition is that the bride’s single female friends write their names on the sole of her shoe—as they get married, the bride crosses off their names.
Before the bride’s veil is placed on her head, she circles the veil over the heads of the single women in her dressing room to bring them luck in finding a husband. Then a happily married woman will place the veil on the bride’s head to bring her marriage luck.


Traditional bridal wear for an Armenian woman would be a red silk gown and a gorgeous headdress. Often times, the bride and groom would wear gold or silver crowns and carry lit candles as they proceeded to the church on horseback. The bride wears an outer and inner veil, the inner veil is only removed after the ceremony in private with her husband. After the ceremony, two doves are released to symbolize the peace and love of their new relationship.


During the ceremony, the god-parents who must be an exemplary married couple act as witnesses. The godfather must bring the most expensive gift and he takes the bride to the altar. At this point, the godparents must accept responsibility for the couple. The godparents will hold a cross over the new couple's heads, and tie their wrists with a thread. Sometimes, the bride's mother would place a flat-bread on the bride's head, to show she is now the bread-maker.After the ceremony, the bridesmaids and groomsmen line up and hold flowers up in the air forming an arch through which the bride and groom may enter the reception. A pair of doves, which symbolizes love and happiness, is released and the guests throw money at the newlyweds. During the reception, traditional food such as dolmas, hummus, bourek or kabobs is served."

"May you grow old on one pillow" is one popular toast that can also be used as the theme of the wedding. Print the phrase on invitations, programs or engrave on a silver keepsake wedding favor for guests.