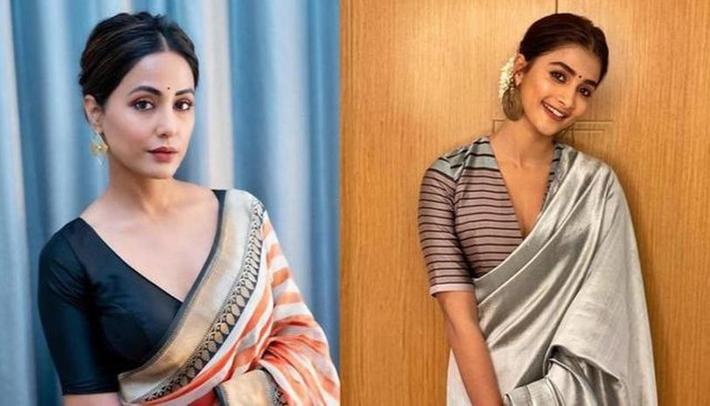 Hina khan and Pooja Hegde, two beautiful faces, whom everyone knows about them. Both are celebrated names in the industry. The one thing that has common in both of them, is a similar taste for sarees.

Recently, Pooja Hegde wore a saree for an event that was similar to Hina Khan's saree pattern. She sported in a grey silk saree for the success event of her film Ala Vaikunthapurramloo. Pooja took a minimal makeup on her face with a small size black Bindi and neat hair bun. she looked like a diva.

Pooja Hegde's movies Jaan and Valmiki are making too much noise. Meanwhile, Pooja will romance superstar Prabhas in Jaan, which is reportedly yet being filmed in Hyderabad.

Another hand, Hina Khan was last seen in Vikram Bhatt's Hacked and is now gearing up for her next titled Lines, alongside Rishi Bhutani. From television actor to Bollywood film 'Hacked', Hina Khan has become a popular actress in the industry. she won all fan's hearts not only with her acting skills but also her trendy fashion style statement. She always gives a major goal for fashion. The 'Hacked' actor Hina Khan opted for a similar silk saree for one of her events. She also took a hair bun and wore a pair of dainty danglers for that event. She also wore bold eye makeup and a bindi.

Both were looking similar in silk saree patterns that stormed the internet in no time.