Before I get into my (not so) comprehensive review a quick note. The hotel was called both Santa Teresa Hotel and Relais et Chateaux Santa Teresa in the past. Recently it was acquired by the Accor Hotel Group and in April 2016, it was rebranded as Santa Teresa Hotel RJ MGallery by Sofitel.

I was familiar with this hotel well before I even booked our tickets to Rio. I found it on Instagram and knew right away it’ll be our home when visiting the city. I did shop around the area but I couldn’t find (or more like I did’t want to find) anything offering a better value.

The hotel is located in the bohemian district of Santa Teresa, hidden between the mountains surrounding Christ the Redeemer. The area is well known for its art galleries, cobblestone streets, “Brooklyn-y” vibe and of course the yellow tram which is finally operating again.

The easies way of getting there is by taxi, they are fixed rate from both the airport and the bus terminal. Public transport is limited to the earlier mentioned tram and a bus departing from “Centro”. If we wanted to go to the beaches normally we just walked to the nearest subway station called Gloria and took it to either Ipanema or Copacabana. The stop is 15 minutes away, we like walking but keep it in mind if you don’t. If you prefer taxis, Ubers are cheap, the 30 minute drive to the beach cost around $7. We usually try to avoid taxis when not necessary simply because we like to be part of the city and cabbing around kills all the discovering and getting things done by ourselves. The hotel is hidden behind huge wooden walls. Once passing those you’ll find yourself in a lush tropical garden. Just by the reception area I knew the hotel will be fantastic. It was beautifully decorated with local art, dark tones dominated, giving it a sophisticated yet casual look. We arrived really early so our room wasn’t ready. That wasn’t a problem, we wanted to venture out in the neighborhood anyways and find a lunch spot. A couple of hours (and Original cervejas) later we were back at the hotel, still well before the usual 3PM check-in time but they were accommodating and had our room ready. Just as a side-note, do yourself a favor and visit Bar do Mineiro for lunch. A local favorite with killer Caipirinhas and Feijoada. Our room was located on the 3rd floor. Even that it was “only” a Deluxe one, I was really happy with it because it boasted with incredible views overlooking the north of the city and the Guanabara Bay. Actually we got really lucky and had views of Chris the Redeemer too. As for the size, it was quite large with its 400 sq ft, the only thing I was missing was a separate sofa for occasional lounging. In front of the bed there was a desk with a wooden chair, not the most comfortable if you have to work but does the job.

The bathroom only featured a shower but not a tub. Who needs to soak in hot water in a place where it gets to 110 degrees anyways?

The hotel isn’t too big so grounds equals to the pool and bar next to it. It’s a city boutique hotel not a resort in Maui. That’s completely fine, most of the people visiting the hotel are couples in need of a relaxing escape. There wasn’t a gym in the property so if you feel like working out I recommend running around the area. People are somewhat scared because of the proximity to the favelas but Santa Teresa is probably the safest neighborhood in the city. If you’re crazy enough like us, you can just run to the beach but don’t leave your Nikes unattended once you get there.

Need to get pampered? Naturally the hotel has a Spa on premises.

The pool area was fantastic, mostly because its views but I let the pictures speak for themselves. 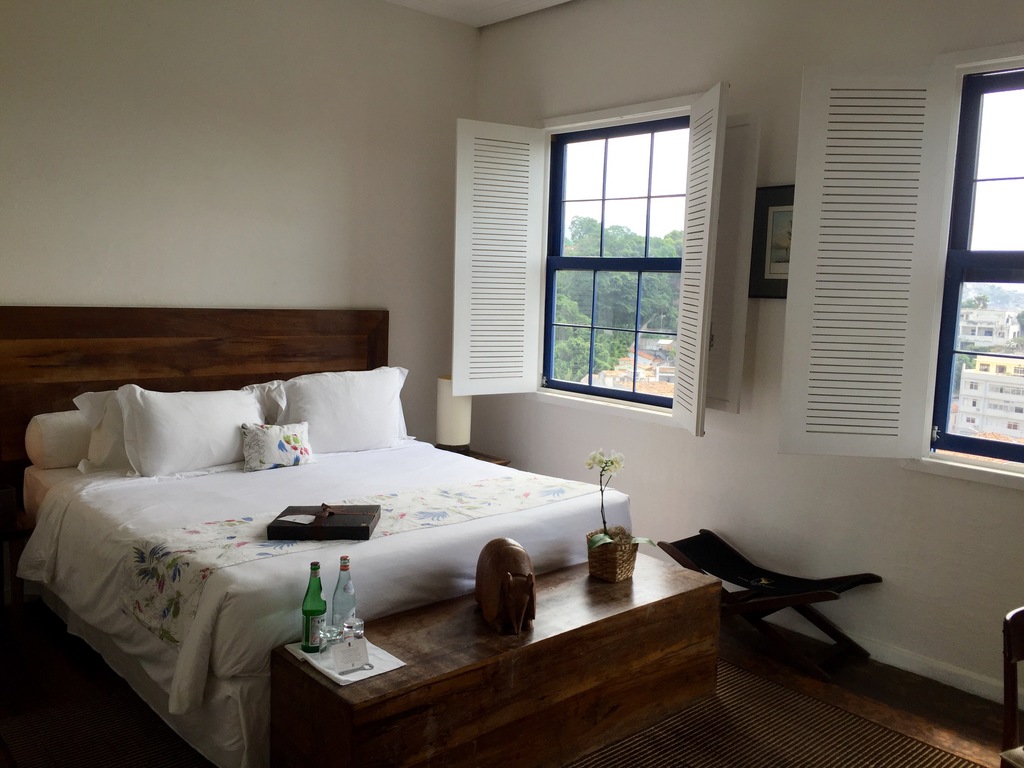 Breakfast was served at Terreze, one of the hotel’s two restaurants. Similarly to the rest of the property I liked the tropical setting of it. It had both and indoors and outdoor seating, to be exact half of the restaurant had its floor-to-ceiling windows open. The two rooms were separated by a crystal wall (wine shelf) so it fitted both who preferred the fantastic morning breeze or the ones liking the A/C blowing in their face instead- ok, I'll give you a break on hot and humid summer days. Breakfast consisted of both a full buffet and an a la carte menu. The offering was quite extensive, felt like I’m at an Asian 5 star hotel where you can’t resist of having breakfast, lunch and dinner at the same time.

Food was delicious, especially the Egg soufflé and those guayaba-white cheese danishes were to die for. We had a great time at the Relais et Chateaux Santa Teresa. We loved the area, it was exactly what we were looking for: A local neighborhood without the sh!tshow Copacabana and Ipanema is. Yes, their beaches are gorgeous but I can’t call them the most attractive places at night. On the other hand Santa Teresa is the exact opposite, just buy a caipirinha, a beer or whatever you like, stroll the area, meet people, listen to live music and soak the atmosphere in!

Sounds like I’m selling more the area than the hotel itself. The hotel is actually proud of it and blends perfectly in this artisty vibe. I liked everything ,both the property itself and the staff, it’s definitely my #1 choice if when we visit the city again.

For the full review with more pictures click here.