Jacqueline Fernandez looks stunning in a Red sheer saree for the promotions of her film Bhoot Police!

Wedding season is upon us, which means it is time to revisit some note-worthy looks of our favourite best-dressed celebrities. Bollywood diva Jacqueline Fernandez, whose film Bhoot Police started streaming recently, never fails to turn our heads with her bold choices. From sexy blouses to embellished sarees, there's nothing Jacqueline cannot pull off.

The 36-year-old actor recently made an appearance on the sets of Dance Deewane 3 to promote her film Bhoot Police with Yami Gautam. She chose an embroidered red saree for the occasion and looked breathtaking. Her stylist Chandini Whabi also shared a picture of the actor in the saree.

The six yards Jacqueline draped herself in is from the shelves of clothing label Torani, a favourite of several Bollywood celebrities. If you are looking for inspiration to look the best-dressed wedding guest at your best friend's big day.

Jacqueline wore the six yards with a sleeveless thread embroidered blouse with a cropped hemline in the same ruby-red shade. She also wore stacked bangles, drop earrings and an emerald ring with the ensemble. Leaving her tresses open in a side parting and choosing bold red lip shade, minimal make-up, winged eyeliner, mascara-laden lashes and on-fleek eyebrows for her glam, Jacqueline rounded off her look. 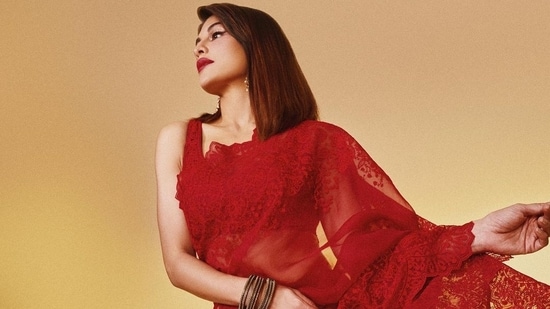