From movie promotions to attending weddings and other public appearances, Alia Bhatt maintains a class wardrobe. Alia is dropping major cues on how one can look gorgeous wearing ethnic outfits at weddings. From Manish Malhotra, Sabyasachi to Anita Dongre, she donned each and every designer’s outfit quite gracefully and looked gorg! Be it ethnic wear or modern silhouettes, her fashion game is always on point.

Known for her effortless yet head-turning style, Alia Bhatt is the millennial…

When you think of Rani Mukerji’s favourite couturiers, it’s safe to say you’d imagine Sabyasachi Mukherjee to top the list. The Bengali actor has been a loyal fan of the Kolkata-based designer on and off the red carpet for years, and even picked one of his creations for her wedding in 2014.

Rewind to 2018, the queen of bollywood Rani Mukherji was seen in an Indian avatar at Sonam Kapoor Ahuja’s wedding reception in Mumbai. She opted for a beautiful sequin embellished maroon and…

Sara Ali Khan is on her path to becoming the next reigning queen of Bollywood and we are not complaining. She is ruling the tinsel tower with a lot of brand endorsement and film projects.She might be just three films old, but she already commands a huge fan following on social media.

Recently, a picture of Sara in white saree is going viral on the internet. Donning an all-white…

Anita Hassandani beautiful Earrings Collection you must check out!

Anita Hassanandani is one of the hottest TV actresses and there is no denying it. The actress has been in the industry for over a decade now and looks like while the actress is getting older, she is getting better as well.

The actor is a big-time fashionista and is often seen sporting beautiful earrings. Not only her…

We all know that Deepika Padukone is queen when it comes to flaunting a saree. Her signature style being high-necks and sheer sarees, she nails every look perfectly.

She rules the fashion world just like she rules the acting world! She can pull off simple jeans with a top look and a graceful saree in the most beautiful way possible! Be it her Sabyasachi saree look or her Manish Malhotra stylish saree; this South Indian beauty charms us all over again.

After her wedding, Deepika…

Krishna Mukherjee is one of the most popular actresses of the small screen. The diva is known for her role in Star Plus' show Yeh Hai Mohabbatein.

The bong beauty is known for her fashionista avatar and her Instagram profile is proof. Krishna has posted several pictures where she is seen displaying her fashionable side and has always rocked her each and every look.

And now, in her latest Instagram post, we can see how Krishna has opted for an Indo-western saree and we can't…

Nia Sharma is considered one of the boldest and most beautiful actresses on TV. Marjawan and Naagin 4 fame actress Nia in Ishq also prove it by putting their pictures on Instagram. She always impresses fans with her style and charm.

She is known to make heads turn with all her looks, as she carries any attire with grace and boldness. In her, all desi looks, Nia Sharma looks so scintillating and amazing that it is very difficult for the onlookers to get their eyes off her beauty.…

Bollywood to Hollywood, everyone seems to be loopy about Indian traditional outfits. Naomi Campbell is without doubt one of the greatest and most demanded fashions on the earth. Apart from modelling, she can also be an actress and a businesswoman. Naomi is seen in lots of films and TV exhibits and has walked down many runways in lots of prestigious trend exhibits.

Similar to many different Hollywood actresses and fashions, she was additionally noticed in…

As Harmanpreet Kaur-led Team India is all set to take on the defending champions Australia in the 2020 ICC Women’s T20 World Cup 2020 on Sunday (March 8), Mithali Raj – India women’s team captain in the 50 overs format – shared an inspirational message for the Girls in Blue on social media. Indian veteran can be seen breaking stereotypes as she was seen batting in a Indian saree.… Every saree lover and every Bollywood buff would know that when it comes to experimenting with sarees, no one can beat the ever gorgeous Shilpa Shetty Kundra! With a perfect figure and bold fusion choices, she plays around with saree like a pro. The new mother and leggy-beauty has the most brilliant collection of Indian sarees, after Rekha, we feel.

Shilpa Shetty is the one Bollywood diva who has…

Mandira Bedi is a popular actress and host who has hosted many ICC World Cup television broadcasts. In 2013, she even launched her own saree store and debuted as a fashion designer and presented her saree collection during the Lakme Fashion Week of 2014.

We absolutely adore how she has taken this love affair with the traditional saree and added her own touch of sensuality, elegance and…

Television actress Hina Khan is a fashionista. She not only loves to go all trendy and modern, but likes to go back to her roots by sporting traditional Indian wear. Hina is not afraid to experiment and is down to try anything. She is not intimidated by bold colors and prints, instead choosing to embrace them. In fact, she manages to carry out every look with absolute confidence. And we love it! From being the…

Alia Bhatt has nailed her look in Pastel Green Lehenga

Whether choosing a decadent hand-painted saree on the red carpet, or dressing in a bandhini kurta for a friend’s roka, she has nailed several unmissable looks from his body of work. One such memorable outfit she served up was the chartreuse lehenga the 26-year-old opted for Armaan Jain and Anissa Malhotra's glitzy wedding festivities.

Alia always outdoes herself when it comes to dressing up in traditional garb. Alia's designer pink and…

Recently, film producer Rikku Rakesh Nath threw a grand wedding reception of his daughter Dakshina Nath in Mumbai, where many Bollywood celebrities were in attendance. 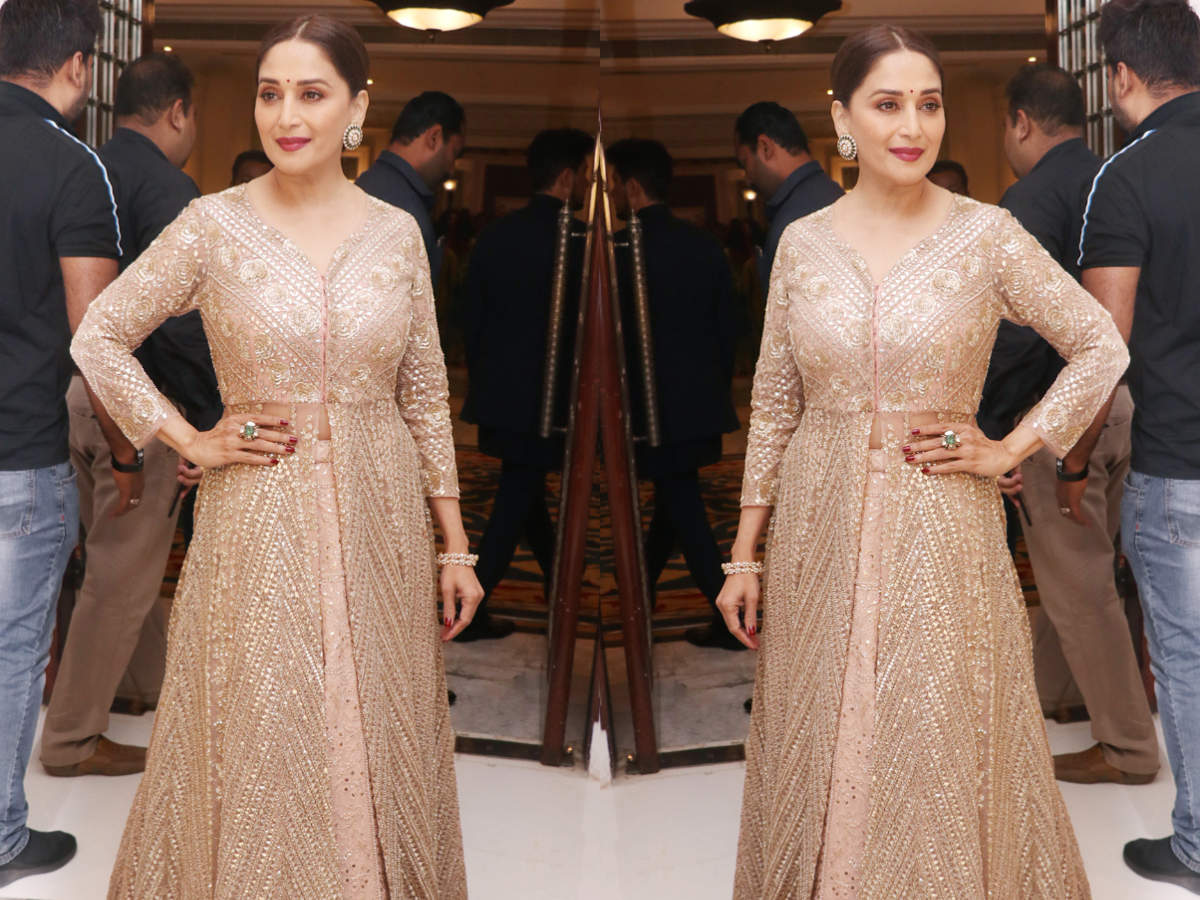